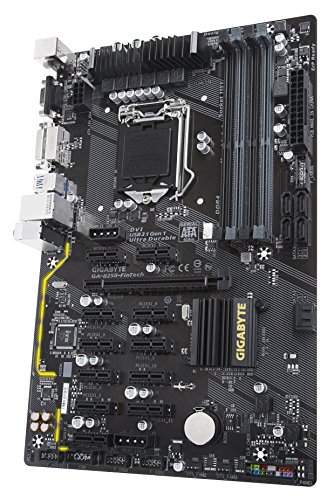 Gigabyte, in order to stay competitive with Asus, was also quick to jump on the B250 bandwagon and create a cryptocurrency specific mining motherboard. Gigabyte’s offering has 12 total PCIe slots – 11 of them are PCIe 1x slots, and one of them is a PCIe 16x slot.

Resale on this board may not be that great, as it’s a cryptocurrency specific mining motherboard. However, there are many reviews of people building low power consumption PCs that are trying out this B250 motherboard because of it’s cheap price, and finding it to be a decent motherboard even when not using it for a GPU mining rig build.

At first glance this board seems like a great option – it’s relatively cheap, it can support up to 12 GPUs, and it’s from a name we’ve all heard of. However, there are quite a few reviews of people having issues getting the board to work with more than 6 GPUs. On a thread over on Reddit that compares the B25-Fintech to the Asus Z170a mining motherboard, there is just as many people saying they love the Fintech as there are saying they’ve had issues with it.

One Reddit user says they were using the Asus Z170a motherboard – using the 7 PCIe slots, one of them had a 1-4 GPU multiplier, and they were using the M.2 slots with M2-PCIe adapters, for a total of 12 GPUs. They moved the GPUs over to the B250 Fintech and had nothing but troubles. In the end, after much troubleshooting, they had to tune back their GPU overclock settings in order to get it to run stable. 6 GPUs worked fine, but whenever they went above the 6 GPUs, they had to downtune the cards and one of the GPUs is actually unable to be overclocked.

Immediately after that story, another Reddit user says “What do people dislike about this mining motherboard? I have one running 12 GPUs and haven’t had a problem.”

More of the best mining hardware:

Have you purchased or used this product? How was it? Cancel reply